Before learning how to conjugate basic verbs, you need to know what the subject pronouns are. Here they are listed below. The same format will be used throughout the site.
NB:

The two main verbs that form the foundation of the French language are être and avoir. You can not do much in French if you do not know these two verbs. Below, they have been conjugated in the Present Tense.

N. B.
The next two most used verbs in French are "Aller" and "Faire". They are conjugated below.

The four verbs conjugated above are all irregular verbs. The majority of verbs in French are actually called "ER" verbs. I have conjugated a few in the present tense here below to illustrate how they work. Fortunately, once you recognize how many verbs are indeed "ER" verbs, you can say quite a bit.

NB:
Try this game to see how you are progressing with things learned so far.

IR and RE verbs: regular

There are more verbs out there of course, and they don't follow the ER pattern much.  This is why the present tense can be so hugely frustrating for students.  Below is yet another table of verbs only these end in IRor RE.  There are patterns there if you look carefully.  These are considered "regular" verbs, which means they more or less follow the rules. 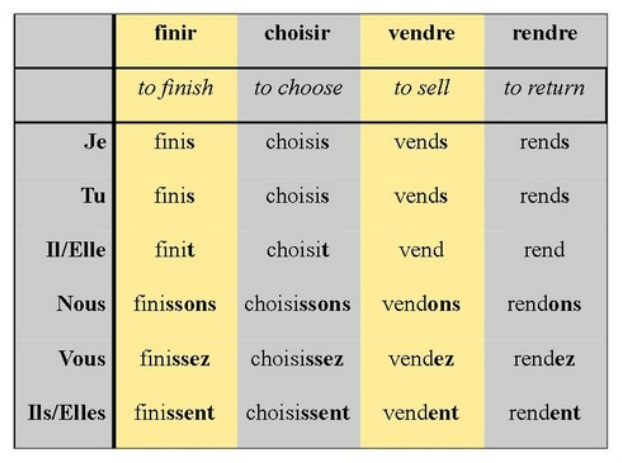 IR, RE and OIR verbs: irregular

This is the last group of verbs to look at.  I promise.  These are the irregular IR, RE and OIR verbs.  There are patterns here too so look carefully.  Notice how "nous" and "vous" often break from the pattern.